As app store legislation targeting tech giants Apple and Google moves forward in Congress, Apple today is out with two more new reports meant to demonstrate how successful the app economy has been under its reign. The company commissioned outside firms to produce analyses related to job growth and earnings in the iOS developer community. The studies found the iOS app economy now supports more than 2.2 million jobs in the U.S. and indicated a 118% increase in U.S. small developer earnings over the past two years.

Apple again tapped Analysis Group for one report — the same firm it’s used to produce reports to back up its position on its commission structure or to highlight the growing amount of commerce that takes place via apps. Last year, for example, that figure grew another 24% to $643 billion while Apple noted around 90% of those billings and sales were commission-free.

The larger point Apple is attempting to make with each new report is that Apple’s current system is working well — that it’s fair; that its commissions are comparable with rival app stores and other software marketplaces; and that ultimately, Apple’s app store business is good for the economy. But the underlying tone is also one of warning to potential regulators: beware what you’re messing with. Today’s reports are more of the same.

In the research backed by Analysis Group, Apple shared that revenue for small developers on the App Store in 2019 increased by 113% over the past two years, outpacing the earnings growth of larger developers by more than 2x. In the U.S., smaller developers saw a 118% increase in earnings since 2019. These small developers are those who earn up to $1 million per year and have fewer than 1 million annual downloads, said Apple. 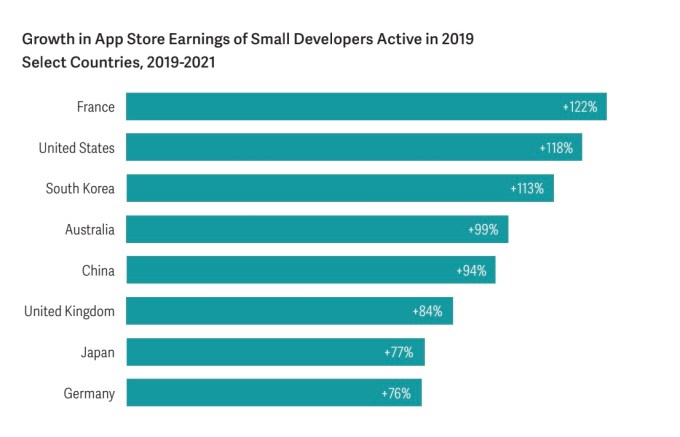 It’s interesting that Apple broke out small developers by both revenue and downloads, given that its own App Store Small Business Program, launched on Jan. 1, 2021, only uses the $1 million threshold to drop commissions for small developers from 30% down to 15%. A certain number of downloads is not used as a threshold for that program. If Apple continues to chart this same growth metric over the years to come, then, it won’t be possible to make a direct comparison between these figures and its Small Business Program.

The report also examined the number of new developers joining the App Store ecosystem in 2021, noting that approximately 24% came from Europe, 23% from China, 14% from the US, 4.3% from Japan, and 34% from other regions including Korea, India, and Brazil. The number of smaller developers over the past two years has also grown, it said — in the U.K. by almost 40% since 2019, and in Germany, by over 25%.

While Apple believes this data can help make the case for its successful running of the App Store, if anything, these figures highlight how important the App Store is to a wide range of global developers. That, in turn, could also help demonstrate why a system this large and powerful could also be due for more regulation and competition.

That’s now underway. As Congress pushes forward its own app store bills in the U.S., Big Tech reform impacting Apple is coming into force in the E.U. by way of the Digital Markets Act (DMA), expected to roll out this Spring. The DMA will bring in a series of up-front obligations on so-called Internet gatekeepers which are likely to apply to the big app store operators. In the U.K., a provisional report by the competition regulator last December suggested Apple, as well as Google, are both likely to face intervention over the control of their app stores, once the government legislates to empower a planned ex ante regime for regulating tech giants to address entrenched market power. The European Union recently agreed to its own ex ante reboot to tackle Big Tech.

Apple recently has been fighting back particularly hard against one of the DMA requirements to give consumers the ability to install apps from outside the App Store, also known as sideloading. Apple has stringently argued that permitting sideloading will make the iPhone less safe and secure for end-users. Stateside, Apple has been embroiled in a lawsuit with Fortnite maker Epic Games over much of the same thing — the game maker wants to allow users to install its apps without paying Apple a commission, including by hosting them in its own App Store and processing its own payments. That lawsuit is under appeal.

Today’s reports even suggest that some large developers — perhaps those of Epic’s size, in fact — owe their mobile successes to Apple’s App Store.

The research plots the growth of developers that earned more than $1 million on the App Store in 2021, finding that 45% of today’s large developers were either not on the App Store, or had less than $10,000 in earnings, five years ago.

While it is always interesting to have access to new App Store data, Apple’s latest research only shows what a powerful force the App Store has become over the years. It’s an ecosystem that’s responsible for billions of dollars of commerce, that’s fueling job growth, and where Apple’s decisions around revenue share agreements and developer policies can impact businesses earning millions.

Apple concluded the reports by noting the size of the App Store itself has now grown to 1.8 million apps. The store is visited by over 600 million people weekly, it said, and Apple has more than 30 million registered developers.

The reports come ahead of Apple’s annual developer conference, WWDC, which runs June 6 through 10.