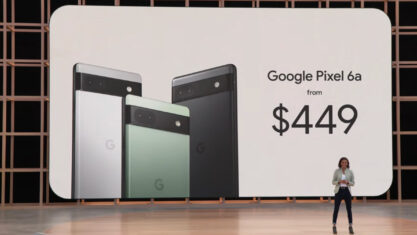 Google unveiled the Pixel 6a at its I/O event on Wednesday. In Canada, the phone costs $599 and comes with the company’s top-of-the-line Tensor chipset. However, Google neglected to mention one important missing feature: the Pixel 6 ditches the 3.5mm headphone jack.

This is a first for Google’s entry-level a-series smartphone line.

Though I don’t use wired headphones anymore, the 3.5mm headphone jack in the Pixel a-series has been a staple for years now and makes sense given the device’s entry-level position.

Apple started the industry shift to ditch the headphone jack back in 2016 with the iPhone 7. Then Samsung followed suit pretty much right after making fun of Apple for doing the exact same thing. Even Google made jokes at Apple’s expense at one point.

While Google’s Pixel 6a won’t feature a headphone jack, it does sport 6GB of RAM, 128GB of storage, a Tensor chip and more.

The post Google ditches the headphone jack from the Pixel 6a appeared first on CableFreeTV.