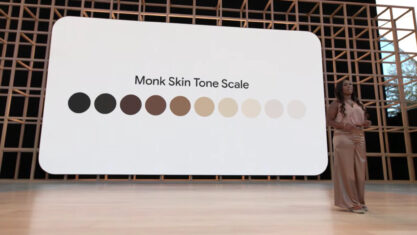 Google has released a new scale that captures the wide spectrum of skin tones.

The Monk Skin Tone (MST) includes 10 shades and is developed by Dr. Ellis Monk, a sociologist and Harvard professor.

Google will incorporate the scale into its products in the coming months. Google says the scale help addresses the ongoing challenges associated with image-based technologies and representation online.

The scale is open source, and anyone can use it for research or product development.

The feature will be incorporated on ‘Search.’ For example, if looking for makeup looks on Google Images, users will have the option to refine search results by skin tone, showing people images that represent them.

Google Photos will also be using the scale through the launch of ‘Real Tone filters.’ These filters will be evaluated by the MST Scale and allow users to choose a filter that works with skin tones presented in a photo. Google will roll out Real Tone filters across Android, iOS and the Web in the next couple of weeks.

The MST Scale is Google’s most recent action when it comes to dealing with representative skin tones. The tech giant introduced ‘Real Tone’ on Pixel 6 devices last year. The feature recognizes darker skin tones and complements them when taking images. Real Tone filters seem to be an expansion of the feature that was exclusively available to Pixel.