At the Google I/O developer conference today, the company introduced several changes designed to make it easier for Android app developers to generate revenue via subscriptions, particularly when trying to reach users in emerging markets. Most notably, the company said it will now allow developers to offer users the ability to subscribe via prepaid plans which essentially provide access to an app and its services for fixed amount of time the developer sets.

The users would then be able to buy top-ups in the app when their subscription ran out and they had the funds to continue. Google said the feature would make sense in regions where pay-as-you-go cellular plans are standard. In those markets, consumers are already used to the prepaid model, so extending it to apps could help to boost developers’ subscription revenues. However, prepaid subscriptions could also help to target other use cases as well — like subscription-adverse customers who are hesitant to get locked into ongoing charges and who want more control over when and how much they’re spending on their mobile apps.

Last March, Google had reduced the minimum price limit for products in more than 20 markets across Latin America, Europe, the Middle East, Africa, and Asia-Pacific, allowing developers to drop prices down to as low as 10 to 30 cents (USD). At the time, the company explained these “sub-dollar prices” would allow developers to reach new potential buyers by adjusting pricing to “better reflect local purchasing power and demand.”

Now, Google says developers can drop prices to as low as 5 US cents. This would allow developers to also run local sales and promotions and support various micro-transactions, like in-app tipping.

While these changes will help to better target Android app users in emerging markets, Google made other improvements to app subscriptions, as well. 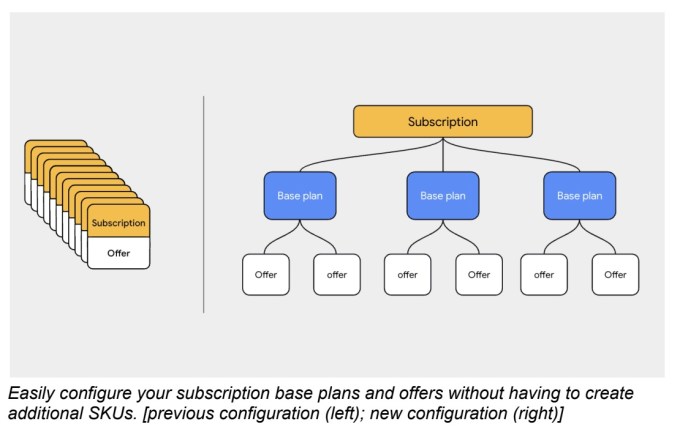 In this setup, a developer can establish multiple base plans each with its own billing period and renewal type — like monthly or annual auto-renewing plans or monthly prepaid plans. Then, for each base plan, they can create multiple special offers across the subscription lifecycle. For example, they could create an acquisition offer for a limited time free trial, an upgrade offer to move from a prepaid plan to an auto-renewing tier, or even a downgrade offer to help retain a subscriber who may be looking to cancel as they’re not using their full subscription benefits.

Google also offers an In-App Messaging API that can be used to remind users to update their payment information when their payment method is declined, it noted.

The company last year announced it would begin to support other payment methods, including both cash and prepaid plans. In the time since, it’s expanded its payment method library to include over 300 local payment methods in 70 countries, and added eWallet payment methods such as MerPay in Japan, KCP in Korea, and Mercado Pago in Mexico, Google said.